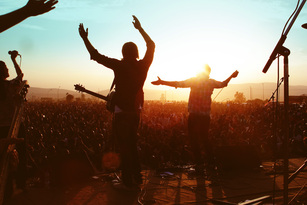 Many festivals promote themselves as music and art festivals but the music is the main attraction and the reason people go. Music and any type of festival or gathering, secular or non-secular, go hand in hand, so it is fitting that bands play for both pop festivals and religious festivals.

People want to feel connected. They go to these religious festivals and music festivals in an attempt to become more in touch with themselves, their true selves, and to connect with like minded individuals. Just like our ancestors sat around camp fires, listening to drums, people attend these festivals to have a similar experience. The use of pyrotechnics and fire during these shows are very similar to fire altars and bonfires for religious celebration used in ancient times/religions. A further look at elements of religiousness at festivals can found on the Festivals page.

There are many linkages between music [festivals] and religion. First, I would like to take a minute to discuss why music may cause such an emotional reaction from its listeners before I explore the areas in which music festivals, as well as concerts, may sometimes be viewed as a religious experience from the festival/concert-goers perspective.

A Religious Experience can come by many names, a spiritual experience, a sacred experience or mystical experience. It's subjective in nature in which an individual has contact with a transcendent reality, or an encounter with the devine. This may lead to religious ecstasy, which Marghanita Laski in her 1961 book, Ecstasy. A Study of Some Secular and Religious Experiences, defines the state of ecstasy as being characterized by spontaneity;  that it must contain at least two expressions of feelings of gain, such as unity, joy, salvation, or new knowledge; and either an expression of loss, such as loss of a sense of time, worldliness, or sin; or a "quasiphysical" feeling such as light, heat, enlargement, or peace (Clark, p. 107).

defines as an altered state of consciousness characterized by greatly reduced external awareness and expanded interior mental and spiritual awareness which is frequently accompanied by visions and emotional euphoria (Ecstasy. A Study of Some Secular and Religious Experiences, p.57). Many believe that music has the same capacity to promote powerful emotions and create a similar experience to that of a religious experience but how it happens is still of great debate.

According to Marini (2003), Psychologists John A. Sloboda and Anthony Storr  uses a psycho-linguistic model of the mind to  argue that music expresses our inward states in much the same way as a religious belief system, by providing an ideal order through which to perceive the world and thereby ourselves (p. 3). Moreover, Storr adds that both music and religious belief can accomplish this task because they closely resemble and therefore can analogically or symbolically express the linguistic structure of the unconscious mind (Marini, 2003, p. 3).

Robert Jourdain takes a more physiological approach in acknowledging the ability  that "our brains respond directly to music by producing pleasurable emotional states, the highest of which being ecstasy" (Marini, 2003, p. 3). He states that while the auditory cortex is not as large or developed as the visual cortex, its complex linkages to the frontal cortex and the limbic system make sound a more emotive stimulus than light. This suggests that our response to tone is physiologically structured to generate great  pleasure, even ecstasy, from the perfection of musical form. In regards to musics ability to be transcendent, Jourdain wrote:

"For a few minutes it makes us larger than we really are, and the world more orderly than it really is. We respond not just to the beauty of the sustained deep relations that are revealed, but also to the fact of our perceiving them. As our brains are thrown into overdrive, we feel our very existence expand and realize that we can be more than we really are, and that the world is more than it seems. That is cause enough for ecstasy" (p. 3)

If we refer back to our definition of a Religious Experience, which states "an individual has contact with a transcendent reality... may lead to religious ecstasy, an altered state of consciousness characterized by greatly reduced external awareness... accompanied by visions and emotional euphoria", we can see how this relates to musics ability to generate the same feeling of awareness, into a state  of ecstasy. 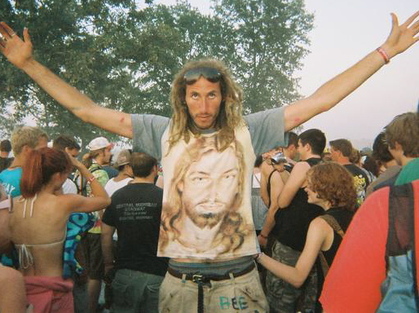