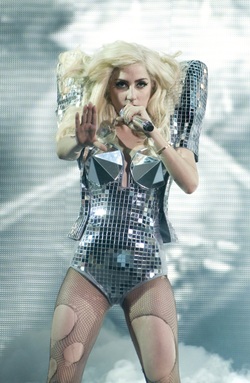 In an interview with Simon Hattenstone, journalist for The Guardian, Lada Gaga  refers to her recent Monster Ball tour as "a religious experience", becoming for many, an alternative to organised faith. But she goes on to clarify, "it's more like a pop cultural church".

Gaga has certainly exploded on the scene and does not shy away from creating a spectacle of herself. Remember the meat dress, anyone? She's eccentric, creative, and she's created a huge fanbase for herself. The single Born This Way basically became the theme song for anyone who has ever felt marginalized or inferior based on who we are, how we look, and where we come from. Yet the pop star insists: "It's more self-worship, I think, not of me. I'm teaching people to worship themselves."

Gaga explains why her fans have come to look to her for guidance rather than the establishment. She says: "The influence of institutionalised religion on government is vast. So religion then begins to affect social values and that in turn affects self-esteem, bullying in school, teen suicides, all those things. It puts me in an interesting position as an artist whose fanbase is commercial and widening. If you were to ask me what I want to do – I don't want to be a celebrity, I want to make a difference."

She continues: "I never wanted to look pretty on stage and sing about something we've all heard about before. I'd much rather write a song called Judas and talk about betrayal and forgiveness and feeling misunderstood, and talk to the fans and figure out what it is society needs. If I can be a leader, I will."

While her claims may seem to be anti organized religion, Gaga is quick to point out that she is not against the church. "Don't say I hate institutionalised religion – rather than saying I hate those things, which I do not, what I'm saying is that perhaps there is a way of opening more doors, rather than closing so many." 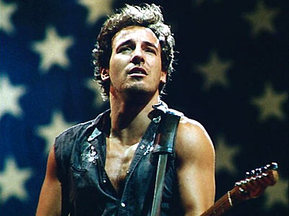 Those who attend Bruce Springsteen concerts often describe them as religious experiences, one author even describes his experience in one word, "church".  Whether intentional or not, Springsteen's lyrics are often loaded with traditional religious images. He was raised Catholic and his songs often have narratives of salvation, faith and desire, and themes of light vs. dark, good vs. evil. It's Springsteen's life performances that truly give way to the religious that is the "boss".

Bruce is notorious for his lengthy, marathon-like concerts, generally over three hours long (All Bruce Springsteen: The Bruce Springsteen Information Center 2012), but you won't find anyone sitting down. Everyone sings along together and knows all the words to all of his songs. One reporter, after attending a Springsteen concert noted that "everyone knew all the words of the songs—even those of his latest album, 'Wrecking Ball,' which had only been out a few weeks. And by “everyone” I mean from teenagers to grandmothers," (Green, P.D, 2012)

Bruce is an icon, a rock and roll hero, a man of the people. Through his music and live performances Bruce creates a community.  Many fans feel that Springsteen truly understands them, and although they ﬁnd it difﬁcult to put some of the more powerful dimensions of their experience into words, many agree that it serves as a cornerstone of community membership, and member ship of the "Church of Bruce" or "Bruuuuuuuuuce", like their chants for him on stage (All Bruce Springsteen: The Bruce Springsteen Information Center 2012).

Springsteen builds a wall of friendship and shared longing for American society to come together instead of falling apart. His concerts, Bruce temporarily bridges the generation gap, the class divide, and the wealth gap. In other words, his music builds communities of people who want to realize their responsibility to each other, in an extremely similar way that religion unites people regardless of race, age or socio-economic status.
Powered by